After 30 years JASON GWEN finally came out as a triple threat. Half of his life he has been mastering the craft of acting and dance. Embraced by the modern queer community, Jason is embarking on breaking into the mainstream with his vocals on universal topics that needs a spotlight. On how do we live now, and how can we redivide the world? An immense addiction for the drums and the bass, and high energy shows that pushes you to move. His newly formed band consist of MONEY, FAME and POWER: a faceless dj, and two charmeleon dancers from the ballet and underground world. NO ONE IS TOO MUCH. Placing the underground, on the mainstream surface.

In the Fall of 2021, he will be releasing a series of singles leading up to the FULL VISUAL ALBUM RELEASE on Christmas Night, December 24, 2021. IT’S NOT A CHRISTMAS ALBUM. From January 2022 he will be embarking on his first world tour, visiting of course, the Netherlands and Europe, but also new regions alike Asia, Australia &North America. Including a returning showcase during Biennale di Venezia 2022.

On January 2 &3, 2022 he holds an exclusive show, including a 10-course tasting dinner, connected with 10 songs from the album –and a LONG AFTER-talk, for only up to 30 people on SECRET LOCATIONS in AMSTERDAM.

Ticket on sale at www.JASONgwen.com/SHOP

DURING COVID-19 THE debut ep CAN ONLY BE STREAMED ON THE free PLATFORM soundcloud.

He had his debut in the music scene in 2017, thanks to, and at the Milkshake Festival and Paradiso in the same weekend. Since then, he has played at stages in the likes of Amsterdam Dance Event, Dutch Design Week Music, Vault Events, Booster Gelderland/Overijssel, at Central Studios in Vancouver, Canada and on the MAINSTAGE Dam Square at Pride Amsterdam.

Besides music, Jason can also be seen acting as a human trafficker in GRENSLANDERS on AMAZON PRIME and starting this season he will make his entrance on the Children’s version, similar to Saturday Night Live, the Dutch ‘Het Klokhuis’ on NPO. In the fall will be releasing his first written and directed short film THE FOLLOWING. As an actor he’s internationally represented by CRAWFORD TALENTS in Berlin. As a host, you can book him via TxLxNT Agency in the Netherlands. He is of Vietnamese /Dutch descent. Jason is head producer and directs all work under his Foundation Arnhems WORK. Always operating ON SITE. 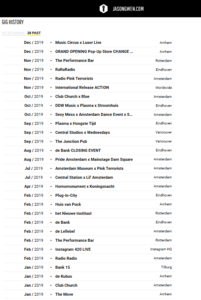