After wrapping up the Performer/Dancer/Maker program at the Artez Institute of the Arts in Arnhem, the Netherlands in 2010, Jason has continuously worked between film projects, creating his own electronics/hip hop sound, and developed concepts, in new ways of showing performances. Working from a different disciplinary, every season.

As an actor, he had the leading role of Wang, in the feature film ATARAXIA, that went in premiere at the Netherlands Film Festival in 2013. And recently in a supporting role of Jing Sheng in the Dutch/Belgian TV-Series GRENSLANDERS produced by Eyeworks Belgium, now streaming on AMAZON PRIME. In the same season, he graced with his music, the stages of Amsterdam Dance Event, Dutch Design Week Music, Vault Events, Booster Gelderland/Overijssel, at Central Studios in Vancouver, Canada and on the MAINSTAGE Dam Square at Pride Amsterdam. He has his popular music debut in 2017 in Paradiso and Milkshake Festival in the same weekend.

During the closing of the Biennale di Venezia 2019, Jason has shown his live video-performance CHANGE at the Personal Structures program, at the European Cultural Centre. Next to the work of Yoko Ono, and in the same curation with Marina Abramovic) A creation about homelessness and modern trade markets. Actual topics before the Covid pandemic hit worldwide. 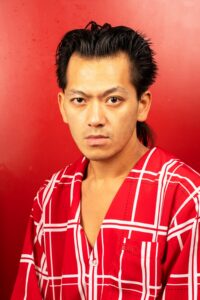 Currently he is preparing his first world tour, for when the world opens it’s doors again, to share his music around the world.

Arnhems WORK is the vessel where Jason produces and directs performance works, in the public space and on media. With the trust and financial support of Municipality of Arnhem and the Amsterdam Funds for the Arts -as the INITIAL Funds to support Arnhems WORK.

He worked for the following directors from 2010 on:

Jason is born close to Ha Long Bay, Vietnam. Left the country at 8 months, and through a few different countries, ended up in the Netherlands at the age of 5. From the age of 12 Jason travelled between Canada and the Netherlands, as his family is broken up in two, due to communism back in the 80’s. Currently he likes to travel between Amsterdam, Vancouver, and Arnhem. And with a loft in New York, as his future house prospects.