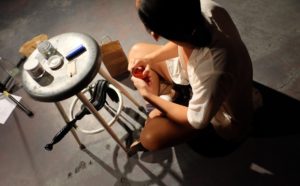 VANsterdam is a stand up, sit down, roll around one man show and millennial look on the emancipation of sex, drugs and rock ‘n roll in Vancouver. The Vancouverians names the city as No Fun City, due to the early closing hours of bars and clubs. Exploring the opening of their first public sex club, learning the hidden rule on consuming alcohol in public and experiencing the on-going growth of coffeeshops under the name of medicinal marihuana dispensaries. An emancipation that happened previously in the 80’s in Amsterdam and Western Europe.

The Vancouverians are being confronted with topics that were living underground in the past, and are now finding its way into the public surface. A look at how people change, when rules and legislation are bending and changing.

With the support of Zoll Ruskin, Club 8×6